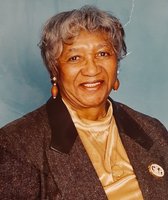 Eunice Loma Carson went home to Jesus at the age of 94. She passed on Tuesday August 4th, 2020, at 6:45 pm at her home in Denver, CO. She was 3 weeks away from her 95th birthday. Eunice was born to GP Maderas and Rosella McNeil on August 28th, 1925 in Rural Travis County, TX. She was the 3rd child of 6 siblings - 4 brothers; Clifton, Floyd, Arthur, Morris and one sister, Jewell. Her surviving brother, Arthur indicates he remembers Eunice used to suck on her tongue and humm. He remembers her being determined and “did not give away her stuff!” Eunice met Floyd Jimmerson in 1939 at the Church of Christ in Temple TX. Eight children were born to this union, Ellie Jewel, Caroline, Darlene, Winnette, Floyd Jr, Catherine, James Ray, and Ricky Charles. Seven of the children were born in Temple before the couple moved to Denver, CO where Floyd built the family a house near 80th and Lipan St. Their youngest child, Ricky Charles was born in Denver. Eunice married her 2nd husband, James Homer Carson in 1972. She led “Carson” to Christ where they were members of Anchor of Hope Church in Denver, CO. Eunice was a long-term resident of Denver, CO after leaving her childhood home of Temple TX. She raised her 8 children in Denver and was an active member of Anchor of Hope Church. Eunice was an outstanding organizer and a beautiful person! She held multiple positions helping people including a house organizer and maid for an oil attorney, and for the prominent O'Connor family in Cherry Creek. Eunice kept an immaculate house and loved to read the Bible. Eunice was known to her friends and church members as being generous, resourceful and for being a great cook! She was known as mom or “Mother” to many people and was very special in many lives. She was a fighter and could be stubborn at times but she loved taking care of her garden, yard and had much pride in her home at 3615 Race. Favorite color: White Favorite Flower: Rose Favorite Music: Gospel Eunice is preceded in death by her parents, two husbands and four children. She is survived by one brother, Arthur and four children- Ellie Jewel, Catherine, James Ray and Ricky Charles. She is also survived by 25 grandchildren and more than 57 great grandchildren.