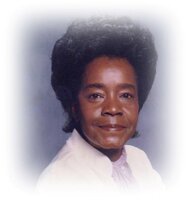 Juanita Acey-Taylor-Coon was the first child born to Ruth and Herman Acey in Bishop, West Virginia on October 30, 1941. She Graduated from Charleston High School and shortly thereafter married her high school sweetheart, Melvin Howard Taylor Sr., which produced (2), children, Melvin Howard Taylor, Jr. and Debra Taylor who both proceeded her in death. In the process of raising her children; she attended Charleston Business School from which she graduated. Juanita then started to work for the State of W VA at the capital, where she worked for (7) years, simultaneously studying to become an Evangelist. She then moved to Denver, CO to be closer to other family and worked as a janitorial supervisor at Stapleton Airport when she sustained an injury which compromised her mobility. After her recovery, she studied to become a CNA from which she retired when new challenges took a higher priority; adopting and raising her great-granddaughter, Amiracle. Seldom was she far from a Coca Cola, a pot of greens, pig's feet chocolate cake and bar-b-que ribs. She enjoyed preparing Sunday Dinners for her family, and others who might drop by; she enjoyed gospel music and sang it daily. She spiritually set the pace for all family members by the holding hands and praying at each and every family gathering. She felt new warmth at New Directions Christian Center when they reached out to perform services for her daughter who passed (1) year ago and desired to attend when the ravages of COVID-19 would decrease. Left to continue her legacy of spirituality is: Amiracle her daughter, i.e., (gr. granddaughter), sisters, Charolette Acey-Betts, S. Charleston, W VA, Doris "Ann" Acey-Hsu, Denver, CO., Melody Acey-Bryant, Reno, NV, Cheryl Reed & Burnette Cash, Pittsburgh, PA. Grandchildren: Adeanis, Jermaine Taylor, Sr., Nya Taylor of Denver CO, and Nea Taylor of Gulfport, Mississippi; and a host of great grand children. Repast: Picnic, and "balloon release" Cherry Creek state Park, June at a time when it is safe for those who wish to share.